Prostration is from the greatest of forms of worship and is due only to Allaah alone, and after the Shari'ah of Islam was revealed, what was permitted in previous nations (of prostration of respect and welcome greeting) was prohibited and declared unlawful, and the Scholars of Islam explain it to be major shirk when offered to other than Allaah. In the Barelwi folk-religion, prostration to their pirs, walis and others in whom a belief of guaranteed intercession is held, is common and encouraged. We have here a video clip (we cannot show it as it has music and dancing) and in a period of less than four minutes, we see six devotees making sujud at the feet of Tahir al-Qadri, a leading figure in the Barelwi folklore religion. Let us take a look at these prostrations:

The First Prostration: This one comes straight in at 10 seconds in the video, a devotee comes from the side nearest to the camera and falls prostrate.

The Second Prostration: We see another one come in at 43 seconds (in the middle) making a sajdah and quickly moving on his way:

The Third Prostration: Just ten seconds later at 53 seconds another devotee (in the beige waistcoat, a bit difficult to see in the first picture) breaks into a sajdah, then taking his time huddling away on his knees, backwards, without daring to stand up:

The Fourth Prostration: This comes in at 1 minute and 27 seconds, and its another quickie, the man comes in from in front does his sajdah, holds it for a few seconds and then makes his way:

The Fifth Prostration: This man in the red hat was very emotional, coming in at 2 minutes 33 seconds into the video, he just would not get up, and ended up having an emotional breakdown, requiring Tahir al-Qadri to get up and give him some love and hugs. The prostration must have humbled him and wrenched his heart...

The Sixth Prostration: Finally, only seconds after the previous man (in the red hat) was taken away, we see the slickest act of them all. At 3 minutes 30 seconds this man was busting an innocent looking dance before lunging forward in a daring display of gymnastics, there must have been at least eight feet from where he started to the point of prostration right at Tahir al-Qadri's feet:

So there you have it, six devotees prostrating to Tahir al-Qadri in less than five minutes. This shows that this was not a one-off and Taaghoot al-Qadri was satisfied with these prostrations.

What is the Ruling on Prostrating to Other Than Allaah?

This will be dealt with in more detail elsewhere, but purely for the purposes of this article, prostrating to other than Allaah is haraam (unlawful), and amongst the Hanafi Scholars are those who consider it major shirk absolutely, since prostration in and of itself is worship (ibaadah) and directing it to other than Allaah is worshipping other than Allaah. There are some Hanafi scholars who held the opinion of tafseel (clarification) in the matter, since in their view it may be possible that a person was compelled and they limit this tafseel only in the case of compulsion (ikraah). As for when there is no compulsion, they (the Hanafi jurists of old) are agreed that a person disbelieves. Likewise, the Hanafi jurists prohibit placing the forehead on the ground and kissing the earth by the feet of a person out of respect and for welcome, and some of them liken it to prostration. What we find with these people today is that they intend veneration of their leaders and guides because they hope to solicit and win their intercession, and this certainly brings it into the realm of ibaadah. Here is a manuscript of a treatise by an eighth century Hanafi Scholar, al-Badr al-Rasheed Muhammad bin Isma'eel (d. 768H): 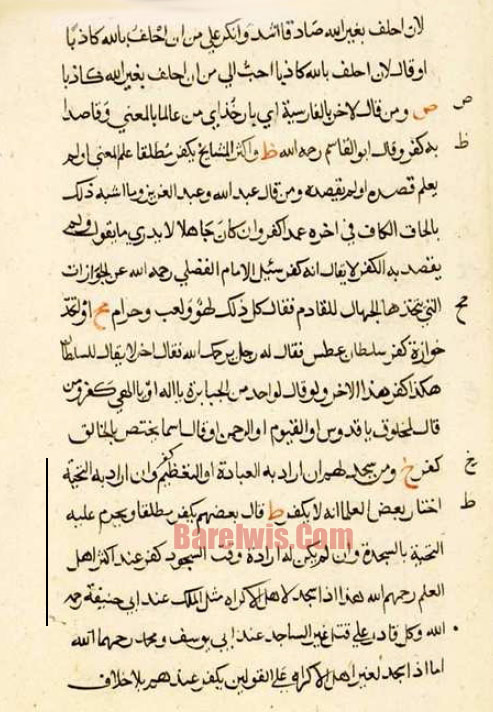 The portion at the bottom reads:

And whoever prostrated to them (meaning rulers), if he intended worship (ibaadah) and veneration (ta'dheem) he has disbelieveed, and if he intended a welcome greeting (tahiyyah) some of the scholars have chosen the view that he does not disbelieve. Yet some of them said that he disbelieves absolutely [no matter what the reason] and it is unlawful for him to make the greeting by means of a prostration, and even if he does not have the intent (of worship) at the time of prostration, he disbelieves in the view of majority of the people of knowledge, may Allaah have mercy upon them. This is - in the view of Abu Haneefah (rahimahullaah) - when he prostrates to those who make compulsion (upon others) such as the king and - in the view of Abu Yusuf and Muhammad (bin al-Hasan al-Shaybanee) (rahimahumallaah) - every person who has the power to kill the one that does not prostrate (to him). As for when he prostrates to other than the people who (impose prostration upon them) through compulsion, upon either of the two views (just mentioned) [which are held], he disbelieves in the view of them all without any difference of opinion.

The last part means that alongside the two views mentioned already earlier, in the situation where prostration is made by one who has not been forced or compelled, there is no difference between the Hanafi scholars that he disbelieves. This makes the view of those Hanafi jurists very clear on prostrating in a situations other than when one's life is threatened. Dear Muslim, if you are sincere and desire the truth, then hold fast to the Hanafi scholars of old and not to Taaghoot al-Qadri and his likes who keep the Barelwi masses in ignorance.

What is the Meaning of al-Taaghoot?

The taaghoot is the one who is worshipped besides Allaah and is satisfied with that worship. This excludes those Prophets such as Eesaa (alayhis salaam) who are not pleased or satisfied that they be worshipped besides Allaah (whilst alive or dead), and they are truly innocent of those that worship them in falsehood. These people did not prostrate to this taaghoot except due to their belief that he is deserving of such veneration and this clashes with what Allaah commanded and sent His Messengers with:

And verily, We have sent among every Ummah a Messenger (proclaiming): "Worship Allah (Alone), and avoid (or keep away from) the taaghoot." (16:36)

The taaghoot is that with respect to which the limits are exceeded in worship and obedience, and prostration to other than Allaah is exceeding the limits, and whoever is pleased and satisfied with the exceeding of limits in worship and obedience with respect to himself is a taaghoot. And the reality is that these ignorant people - we do not make takfir of them until after the hujjah (proof) is established upon them and they are made to realise that what they are doing clashes with what the Messenger (sallallaahu alayhi wasallam) brought - most of these people are misguided by these taaghoots into believing that what they are doing (of worship and veneration of those besides Allaah) is from the deen of Islaam. So they need educating and the establishment of the proof upon them, but one cannot make excuse for these people who are satisfied with this worship and they cannot claim ignorance of what the Messenger Muhammad (sallallaahu alayhi wasallam) came with in this regard, and nor can they claim ignorance of what the Hanafi jurists were upon in this matter, since these Barelwi scholars claim attachment to the Hanafi madhhab.